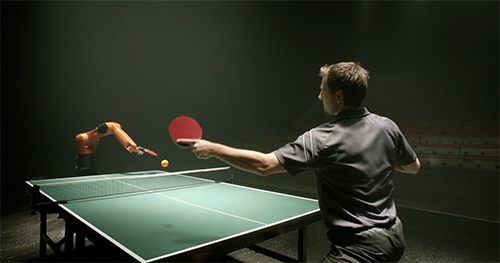 Kuka is the Chinese market leader in industrial robotics. To provide a realistic vision of what robots can be capable of in the future and at the same time celebrate the opening of their new robotics factory in Shanghai, they got German Table Tennis champion and former world number one Timo Boll to take on a Kuka robot in what was dubbed as the first ever man versus robot (arm) table tennis match.

The match took place on March 11th in Sofia, Bulgaria. Since then the results of the match have been sliced and diced into the below final cut video that celebrates the inherent speed, precision, and flexibility of Kuka’s industrial robots in tandem with Boll’s electrifying and tactical prowess in competition.

A making of video is also available at the official campaign microsite www.kuka-timoboll.com.