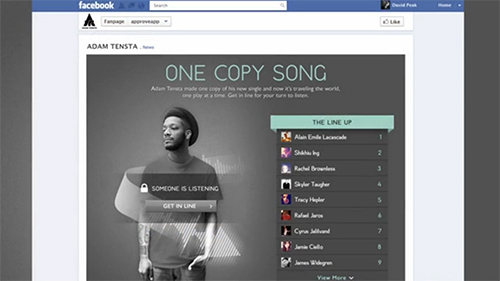 Adam Tensta, a hip hop artist from Sweden remembers back in the day when one had to wait for a song to release, and then stand in line to get the new single fresh hot off the presses. So for his new single “Pass It On” he along with R/GA New York decided to bring some of that exclusivity back with a Facebook app that allowed only one person to listen to the track at a time, before it was passed to someone else.

To spread the song by word of mouth they played on peoples need to get first in line. Registered users were asked to watch, listen or tweet in order to pass 15 people in the line.