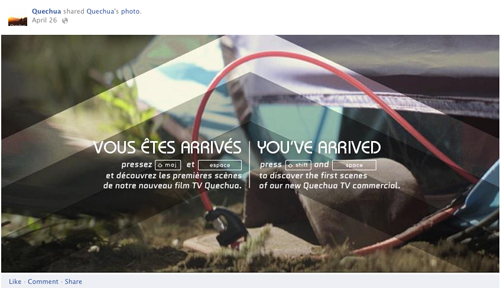 Brands using basic social website functionality to preview commercials seem to be the rage of the month. In this latest commercial, outdoor brand Quechua has leveraged the Facebook Timeline to promote its 2 sec tent.

To successfully view the commercial, you need to load the different images composing the ad by scrolling down their experimental timeline. Once at the bottom, press the shift and space (to scroll up) buttons to see the animation.

I however found it easier to just visit the Facebook photo album, open the first photo and then just keep the right arrow button pressed to view the commercial in Flipbook mode.

In April, Smart Argentina created the first of its kind Tweet Commercial using its Twitter stream. Now Volkswagen Amarok in Turkey has created the Facebook alternative.

The Volkswagen Amarok being the ultimate all terrain vehicle could go everywhere i.e. from the city to sand to water and with some creativity from McCann Erickson Istanbul even on Facebook. 🙂

201 images that followed each other in sequence were uploaded onto a Facebook photo gallery called ‘Amarok FlipDrive‘. Opening the first photo and keeping the right arrow button pressed made the photos flip by fast and give the effect of a running movie.

The flipbook experience was very jerky the first time, but once all the photos were cached, it played as seen in the below video…

Argentina continues to set the standard in creative Twitter campaigns! In this latest campaign, when you visit the Smart Car’s official Twitter account you will think some kid got in there and had his way with the keyboard. Well in reality, its their social media team that has been hard at work to come up with various ASCII art tweets. This has led them to create the worlds first twitter based animated tweet commercial!

Visit the smart Argentina twitter account and hold down the ‘J’ button on your keyboard to see what happens. Alternatively see it on video below…