Lacta a leading chocolate brand in Greece has been creating innovative film content since 2009 around its strategy of being a symbol for the sweetness of love. For the latest installment Lacta invited fans to submit their stories of unfulfilled love, with the promise to give them the happy end they never had i.e. on the cinema screen.

Finally three stories formed the basis of a film screenplay, entitled “Love in the end”, that was released on Valentine’s Day 2013. A transmedia campaign promoted the film and it became a big hit with audiences in Greece. 17% of the Greek Internet Population saw the online teasers, resulting in 700.000 views and hundreds of rave comments. Anticipation for the film’s release was also very high and evident through the increase of Lacta’s Facebook fans by 100.000. This made it’s Facebook page the biggest for any brand in Greece, with 650.000 fans.

The film also had the biggest opening night for any Greek movie in the last 5 years, with more than 75% of the all movie tickets being sold for it. 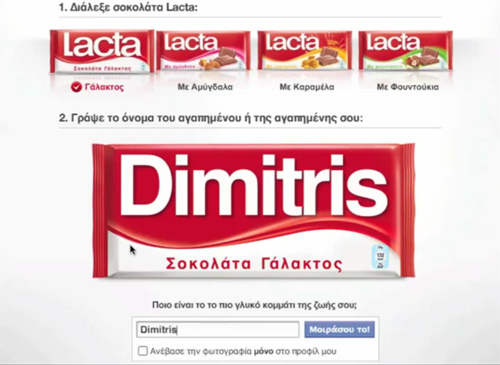 There are some Facebook apps that generate hundreds of thousands of fans while others just flop. This is because of 3 very basic factors…

Take that and you have the Lacta Chocolate Facebook App. The app was built around a simple insight that people would compare their loved ones with chocolates.

Once again OgilvyOne Athens got into action and created an app that lets the people customize a Lacta chocolate wrapper in their loved ones name and compare them to a particular Lacta flavour before using the wall to wall post feature to get the message across.

In just over a month the app generated over 150,000+ fans with thousands using personalised chocolate wrappers as profile pics. 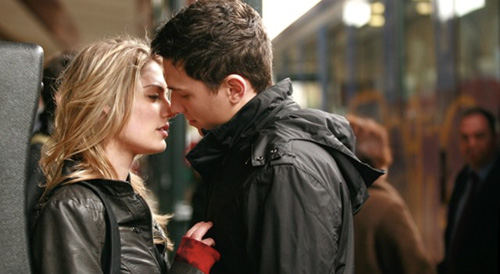 Following the grand success of Lacta’s interactive film in November 2009…Kraft Foods and OgilvyOne Athens set out to create yet another integrated campaign for Lacta, Greece’s leading chocolate brand. This time instead of producing another love story themselves, they set out to create one with their audience.

Kraft Foods and OgilvyOne crowdsourced the 27-minute branded-entertainment film, involving the audience in everything from writing to casting and styling the actors. Some even popped up as extras in the finished film. During filming audiences were kept updated through the campaign blog, Facebook, Twitter, YouTube and Flickr.

Here is a 3 minute video case study on the same…

Then on Valentine’s day the film was aired on Greece’s top TV channel and online, with great success…

A first of it’s kind fully interactive movie that offers an interactive game experience, while it records visitors behavior and offers them the chance to resume it anytime they want. 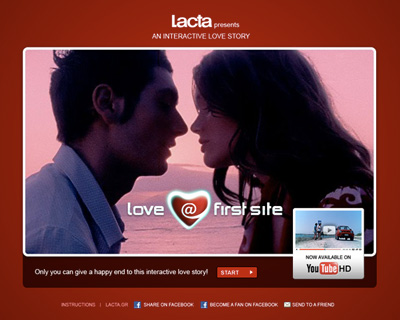 Click on the above screenshot to view the interactive movie.

Is this the beginning of a new form of branded entertainment campaigns? Kudos to OgilvyOne Athens.